When I moved back to Ohio after teaching in Virginia, I noticed something right away that was a popular feature in all classrooms. 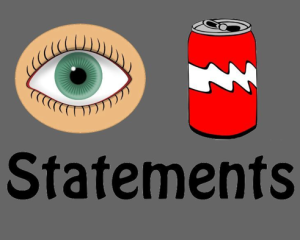 I wasn’t familiar with these but I easily jumped on the bandwagon. I made the letters “I Can” out of construction paper and laminated them, I stuck them on my front board, and for each lesson I finished the statement with whichever standard I was focusing on: I can analyze in detail how a key individual, event or idea is introduced, illustrated, and elaborated in a text (e.g. through examples and anecdotes).

There. Done and done.

It didn’t take long for me to realize, however, that writing something on a board does not mean it is accomplishing anything, despite whatever cute colors, laminated letters or wiggly writing you use.

I began making a point to mention the “I Can” statements. I would read them aloud to the class, I would try to refer to them throughout the lesson, I would end my lessons by going over them.

Read again this sixth grade standard: “I can analyze in detail how a key individual, event or idea is introduced, illustrated, and elaborated in a text (e.g. through examples and anecdotes).” Not the easiest idea for 11-year-olds to comprehend.

I couldn’t blame my students for letting that jumble of words go in one ear and out the other – I was the teacher and I was still having trouble breaking down exactly what the standard was saying.  In an effort to have standards written in student (and teacher) friendly language, I set about to rewrite each standard for each grade I teach (6th, 7th and 8th).

Click below for a free download of the first page of each grade’s checklist. You can see how I re-wrote and organized each standard.6th Grade 7th Grade 8th Grade

While I was doing this, I decided to take it one step further.  I wanted to create a sense of ownership between my students and the standards, so I turned this streamlined version into a checklist.

The first year I tried this, I dropped the ball.  I forgot to refer to the checklist, I completely forgot about tallying up for candy, and so as you would expect, my students quickly lost interest. The next year I made an effort to actually use these charts, and when I made the effort something crazy happened – my students totally bought into the idea too!  I would hear a student say “Wow, I didn’t think I was good with theme but I actually mastered it!”

To buy the entire six-page packet I created instead of rewriting the standards yourself, check out my Teachers Pay Teachers store!